Lockdown has tipped many working-class Nigerians from struggle to crisis

This working-class Lagos community has been reeling from job losses, a collapse in informal services, and rising food and transport costs. The pandemic, Chokpa says, has wrought a swift descent from struggle into crisis.

Her pay of 35,000 naira (£70) a month, working in a lavish home 20 miles away in Banana Island, the city’s most affluent enclave, was suddenly halved in March when her employers left the country as coronavirus cases began to rise. Weeks later, with government lockdown measures taking hold, her husband, a driver for an international corporate firm, was told his pay would be cut by two-thirds because the staff he had been driving were working from home.

“What do we do? Things are a struggle and we have children. They don’t know what these difficulties mean. They just want to know they can have their cereal, can enjoy things. Sometimes we borrow, sometimes we get help from people. It’s only God sustaining us,” she says.

In areas such as Alapere, the fallout from the pandemic has tipped economic ecosystems over the edge. While Juliana wealthier employers’s have been affected by the lockdown, they are better insulated from the disruption. The knock-on effects further down the chain are more profound.

“Cooks, cleaners, house-helps, they’ve lost their jobs or had their salaries reduced. It’s the same thing: their bosses have travelled, or have less income so can’t pay them like before,” she says.

Transport costs have doubled since the government introduced social distancing, limiting passenger numbers to half of normal capacity. Transport providers, also contending with rising fuel costs, responded by raising fares. For millions on low incomes, increases of 200 naira (£0.40) are upending. “My husband stays at work during the week now because to go back and forth is too expensive,” she says. Now she often has to care for their four children alone. 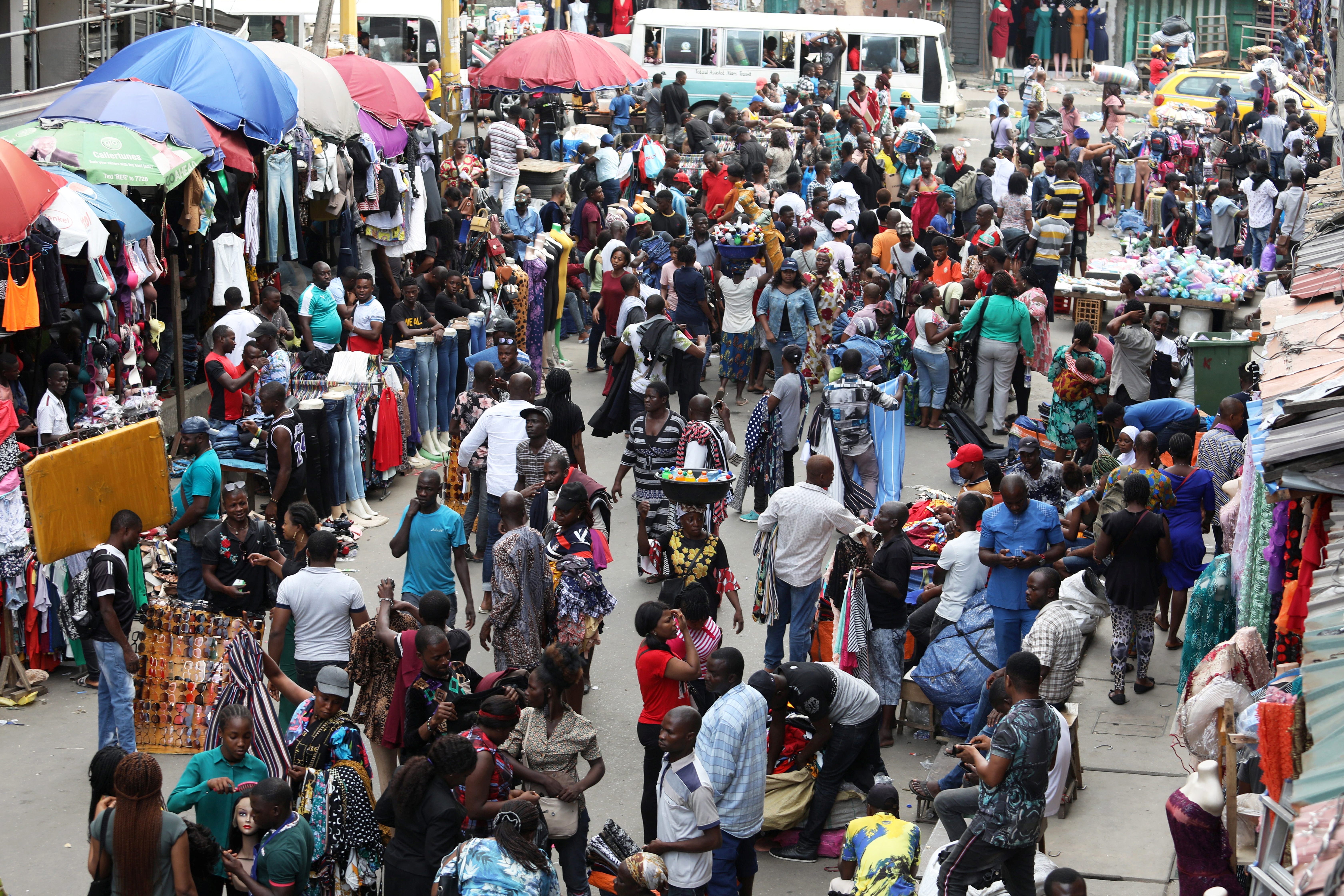 Underneath a partially demolished store front, local people sit talking and observing the footfall along the busy, winding high road. Ndubuisi Njoku has sold gas in Alapere from a concrete store, rented within a commercial building complex, for 18 years. “People buy in less quantities these days,” he says. “Before people would buy gas for the month, now it’s a little every few days or now and then.”

Customers step carefully over blocks of concrete rubble carrying their gas containers for Njoku to fill. Just two weeks earlier, government officials had marked local businesses and homes on the edge of the road for demolition, part of a project to widen the road. His business was one of hundreds that were damaged or destroyed. Many people had no time to gather their goods.

“They could have given us a few months, even a year. This is the worst time, we’re barely out of Covid and now this. It’s like going from the frying pan into the fire,” he says.

For Africa’s largest economy, the pandemic has precipitated a crisis at a time when many people were already in difficulty.

The troubles of many businesses impacted by lockdown measures and trade restrictions, had affected nearly all parts of economic life. A crash in oil prices in April, has further depressed Nigeria’s already strained government revenues according to Mma Ekeruche, an economist. “The economic impact of the COVID-19 pandemic is unique,” she said, affecting aviation, hospitality and entertainment businesses among the most severely. “Another group that will be hard hit are those in the informal sector, who are dependent on daily income and are without recourse to savings,” she added.

The government have quickly responded with financial help, including loans to medium and small business and cash transfers to some poor and vulnerable households. While the programs are likely to have an impact, criticisms have grown that they do not effectively target those in need. “The very poor such as the artisans and rural farmers are likely to be financially excluded,” Ekeruche said. A national register collated by the government to identify poorer citizens eligible for social welfare, only captures a fraction of those requiring help.

Millions of job losses are projected this year. In July, Air Peace, the large private Nigerian airline, announced it was cutting the salaries of most of its 3,000 staff and that 70 pilots would be made redundant. Jobberman, a large recruitment agency advertising mainly white-collar roles, said in July that the number of active jobseekers had soared during the pandemic, from 10,000 to 55,000.

Some 42% of employed Nigerians have lost their jobs during the pandemic, a sobering survey by Nigeria’s National Bureau of Statistics (NBS) said in June, and 80% of households contacted reported lower incomes compared with last year. Already, 82 million Nigerians live on less than $1 a day. Nigeria’s economy was predicted to contract by 5.4%, the International Monetary Fund said, while the government anticipated that unemployment could rise by half to 33%.

For many people, the pain of the economic fallout from the coronavirus outbreak feels inexplicable. Despite high-profile deaths from Covid-19, including that of the president’s chief of staff, scepticism is widespread.

At a popular food market in Obalende, near Lagos Island, footfall is less than half what it used to be. Omozuanfo Fatima, 25, an architecture graduate, helps run her mother’s stall, selling tomatoes, onions and other groceries. “I don’t know anyone who has the virus, nobody has been sick or died, so to be honest we don’t understand why all of this should be happening. None of us are wearing masks,” she says, “but we’re all fine.”

A lack of trust in the government, often derided as corrupt, has hampered any sense of shared sacrifice to help reduce the outbreak. Many people bemoan that the measures have not been adapted to the realities for working people.

Blessing Apara inherited her mother’s fruit and vegetable stall at Obalende 14 years ago. The cost of a bowl of tomatoes has doubled, because importing them from Ghana and Cameroon during the rainy season, when Nigerian harvests are weak, is no longer viable because the border is closed. “I’ve never remembered it being this bad,” she says. “I’ve lowered my prices to get customers but I’m making half of what I used to. I’m just praying it all turns around.”

#EndSARS: Obasanjo to Buhari: Stop shooting of protesters by soldiers, others | Nigeria NG |